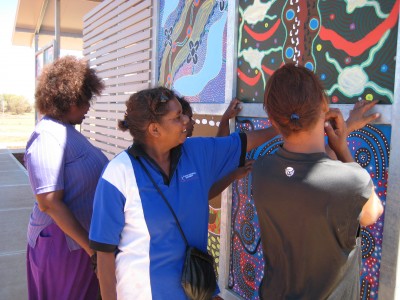 Wiluna Remote Community School was awarded at the 2008 WA Chapter Australian Institute of Architects ceremony for the innovative use of steel and commended for its contribution to public architecture.

Our project was announced winner of the Colorbond Steel Architecture Award; the jury making the following comments:

“This is a modest project designed and constructed around a tight timeframe in a remote location. The outcome is a beautiful building that will become the core of the community.

“The project is comprised of standard transportable units that have been assembled around a central courtyard. The units have been covered with parasol roofs to provide a double layer of protection from the intense heat and sunlight in summer. The entire project was prefabricated and erected in workshops in Perth, including the parasol roofing. These were completed, and approved, before being disassembled and transported up to site for erection.

“The framing for the parasol roof structure forms a spacially engaging contrast to the simple forms of the transportable. Square hollow sections have been neatly assembled to create a layer of structural texture against the solid forms of the accommodation. This structure has been clad in insulated panels that provide protection from the sun. The transportable itself has been transformed into visually engaging forms through the simple use of coloured fibre cement cladding. The project uses prefabrication, a technique that steel is well suited for, to allow it to meet complicated programming and completion deadlines.

“It has created a sustainably considered outcome. The parasol roofs contribute significantly to the reduction of energy consumption in summer. They also create important outside covered areas. The use of steel products in this project is fundamental to the outcome and to its successful delivery.”

We also received a Commendation for Public Architecture for creating “a most appropriate expression for architecture at the ‘edge of the desert’.”

Click for more information and images of the Wiluna Remote Community School.